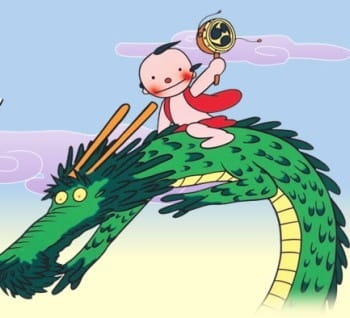 An omnibus-format TV series consisting of anime adaptations of Japanese folk tales, this is one of Japan's longest-running TV series, and Group Tac's second TV series (the first was The Road to Munich, a documentary anime about the 1972 Olympics). The governing rule of the series was that the creative staff change from episode to episode. While later other anime series like Nippon Animation's Famous Works of Japanese Literature would attempt the same, none would be as long-lived or successful.

The rotation idea was that of director Sugii Gisaburo, a visual visionary unequaled in Japanese film history who has revolutionized anime several times in his career, be it in the 1967 TV series Goku's Big Adventure, in which he sought to shake anime free from the dominance of story development by yanking it back to a more cartoonish form, or The Belladonna of Sadness, where he broke the Disney full-animation mold, creating a full-length animated film in a completely new style that was a hybrid of still drawings and animation. The reason for rotating the staff each episode was so that each episode would have a completely different look and feel from its predecessor, and in this it was eminently successful. This is a series that is genuinely rewarding to watch, and is visually one of the richest in anime history.

While this system also meant that quality varied, there were also occasionally superb episodes, as on the staff were many veterans like Group Tac founder SUGII Gisaburo himself, SHIBAYAMA Tsutomu, FURUZAWA Hideo, RIN Taro, and HIKONE Norio. Old episodes started being repeated more and more frequently as the years went on, and production of new episodes finally ceased completely in late 1995, but the series is still widely broadcast.